In the last few decades, we became obsessed with goals. The pandemic taught us a good lesson. We urgently need to review our relationship with goals and the value we put on reaching them. Aren’t we mistakenly confusing reaching goals with the capacity to lead?

The job ad by Ernest Shackleton, a British explorer from the early 20th century, may or may not be a myth. What is a fact, though, is that more than 5,000 people volunteered to join Shakleton. Why? In my view, there are two main reasons.

Shackleton did three things exceptionally well: to lead by example, to redefine goals as the situation called for it, and to embrace a sense of optimism. Always. Shackleton is what we may call now a servant leader, a leader with grit. In his diary, Shackleton wrote: “I pray God I can manage to get the whole party safe to civilization.” That was his true goal.

When we use goals as measuring sticks for leadership, what we see is a distorted picture. Goals matter as they help us focus and set direction. But what is more critical is to adapt to the new reality. Here is what we can learn from Shackleton’s leadership style:

Wanting to meet every contingency is much worse than being light and agile to move quickly and respond to change. As the ultimate survival rule, he always thought that one should be free from every unnecessary ounce, regardless of its value.

He was emotionally incapable of forgetting, even for an instant, his position and the responsibility it entailed. Lives depended on his ability to find an opening, a way out of the situation. There was no rest and no escape, always being alert.

#3 – Of all enemies, fear most demoralization

The cold, the ice, and the sea were deadly, considering the worsening conditions. But to Shackleton, it was the low morale that he feared most.

He often searched crew’s faces to answer the question that troubled him most: how much more could they take. The inability to act was weighing heavily on everyone. In a time of strain and stress, he was capable of imbuing faith in the team for their ability to survive.

Almost everything he had undertaken had failed miserably: the expedition, saving the ship, and the two attempts to seek land. But regardless of the roadblocks, nothing was able to shake his belief that he could lead the team to safety.

Shackleton didn’t want to separate the crew. He thought the chances of survival would diminish if they split. However, as the conditions changed from bad to worse, he changed his mind. He took a team of five to sail on a little boat in the open sea in the hope of reaching one of the islands (870 miles away). That was the only way to return with help.

The story remains a source of inspiration for true leaders. It shows us that when circumstances betray our plans, it is the inner compass that keeps us going.

When we were developing Design Stems®, our method for helping teams innovate and solve problems creatively, we had plenty of goals, just like Shackleton. Along the way, we dropped the unnecessary load. To embark on the unknown, where change was the only constant, we fought with our preconceived ideas. As our goals and problems changed, our vision became more evident. We developed a path to strategic design and how to make it work in the real world.

It takes great skill to achieve what truly matters, so don’t be disheartened if you haven’t met all your objectives. We didn’t go to the South Pole, but the pandemic gave us all a hard time. We didn’t plan for it, but I hope we learned a valuable lesson: no one can succeed alone in the long run. Knowing this, it became natural to put lasting collaboration at the core of Design Stems® so that together, we can face what is to come next. 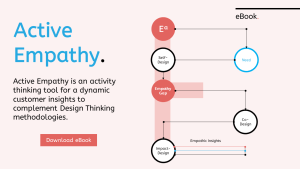